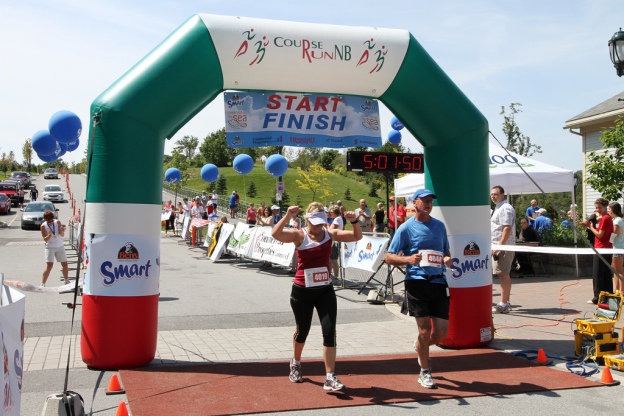 Joy Durdan, left, celebrates as she crosses the finish line in the full marathon at the 2011 edition of Marathon By the Sea.

This is the first in a series of stories profiling runners and walkers who will be participating in the 2014 Emera Marathon By The Sea in Saint John, Aug. 8-10.

As Emera Marathon By The Sea celebrates a special anniversary this year, Joy Durdan of Grand Bay-Westfield, one of the race’s most faithful participants, wouldn’t miss it for the world.

For Joy, MBTS is the continuation of a long love affair with the sport that started in 1999, when shortly after her son entered kindergarten, she decided to take a big step and move to running from walking.

The preferred site was the Irving Nature Park and it was there – 15 years ago – that she taught herself how to run.

Now, on the eve of the 20th running of Marathon By The Sea (MBTS), Joy has not looked back, capturing the runners high early and thriving on it since.

“Running is my passion,” says Joy, who has run some distance in every MBTS since she entered the half marathon in 2001. “I am not a fast runner, I am middle of the pack. I love the accomplishment of every finish line I cross….and of course, I love my medals (bling )!”

Marathon By The Sea represented Joy’s first big race that summer 13 years ago, and she fell in love with the location, crowds, setting, and time of year – everything really.

It’s developed into an annual tradition, one that takes prominence on her personal fitness calendar.

“I am really looking forward to the 20th anniversary of this event,” she said. “From 2001 to 2010, I did the half every year, in 2011 and 2012, I ran the full marathon and last year, I did the half again. This year, I will be doing the half or the full again. I have not decided the distance yet, but will soon because I want to get in for the early bird registration.”

The consistent leg work provided ample motivation to take part in other races and in 2013, she fully committed to the Run NB Super Series, where she finished second in the province in the 40-49 age group, racking up almost 700 points in a whopping 24 events spread across the New Brunswick.

She also participated in seven other events, including the MBTS performance on that brilliant August morning a year ago, one of six half marathons on her rewarding, albeit congested 2013 schedule.

“I have an amazing coach – Daryl Steeves,” she said. “I run the track at UNBSJ every Tuesday and the speedwork really helped my speed last year. (Many people will recognize Daryl) who has been the emcee at MBTS many times, and he does a great job.”

As her love for the sport advanced, so did her appreciation for its benefits.

“When I got started, I discovered that not only does running help with keeping healthy, (and being able to eat lots of yummy foods), it really helps me deal with anxiety,” she said. “I meditate as I go out on long runs. It is my escape and makes me refreshed. I love those endorphins! I am hooked on the feeling I get every time as I cross that finish line.”

She finished her 24th half marathon recently at the Bluenose Marathon in Halifax and is planning to race another in Miramichi in June.

Then, depending on her preference – and preparation – she will decide on what distance to compete at in Saint John.

“It’s my 14th time running Marathon by the Sea, and I still get that nervous, but wonderful energy and excitement as I did the very first time I entered the road race.

“The route at MBTS has changed several times over the years that I have ran it. My favorite year was 2004, when we ran over the Harbour Bridge. It was also my personal best of 1:45. My times range from 1:45 to 2:17 but each finish is a victory, and a celebration of good health and accomplishment.”

Aside from the training miles, dedication and personal commitment, Joy also craves the environment at the end of the race, where so many runners celebrate months of sweat with the reward of personal bests or the accomplishment associated with finishing a major goal.

“It is so great to see people cross the finish line, no matter their age, or physical /athletic ability,” she said. “Every day athletes are amazing, they inspire me to keep going, and in turn, help me inspire other people. No matter how fast or slow each finisher completes the race, we have all ran the exact same distance, and we are all champions.”