Erica MacMillan poses with her friends Angela Stewart and Cheryl Donovan after a race in Hampton.

When we asked Erica (Findley) MacMillan to join us for the Running Whys, she submitted her story (which is below) along with some biographical info, such as her name, the fact she was 27, born and raised in Saint John, was a substitute teacher, married, a mother of twin three-year-old boys….and a runner.

The last point has helped all aspects of her life and in the past few years, she has taken on many challenges, including the Marathon by the Sea. She is back again this year and she outlines her story below.

It was in 2011, I realized that I had been working alongside a seasoned runner, Cheryl Donovan. From that point on, I began asking questions and joining her for runs. We began by completing a cycle of two-minute-runs, one-minute-walks the length of Douglas Avenue. From there, the distances became longer as did the time running.

Erica MacMillan is showing in this photo competing in the 2014 Halifax Mud Hero event.

My goal was set; I wanted to run Marathon by the Sea in 2012 but that did not happen as I became a mommy to twin boys, Tommy and James.

As it turned out, they were two new reasons to push my love of running further.

When I began running, it was all about the fitness aspect of it – lose weight and tone up. However, after having twins, it was more about finding time for me and gaining the feeling of accomplishment a runner achieves when they’ve had a good run.

So, I registered for Marathon by the Sea 2013, the 5-miler – with no pressure for time but a hope to finish with a smile! Little did I know that it would be a beginning of a long list of runs I have completed and/or hope to complete in the future.

You can register for the 2015 Emera Marathon by the Sea here.

Running for fun is always good for the mind, but I soon realized that I loved atmosphere of race day and the adrenaline that comes with crossing the finish line.

In 2014, I ran more races than I believed I ever could have completed. I trained harder than I ever believed p 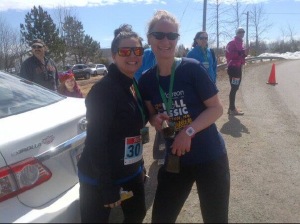 Erica MacMillan and Stacy Sproule pose for a photo after finishing the 2015 Lorneville Loop.

ossible with the help of my running loves – Cheryl Donovan and Angela Stewart. I also got great help from my husband, Jesse MacMillan, who would often came home from work and jump right into Daddy mode so I could get out for a long-distance run.

Check out the complete Marathon by the Sea schedule

This training did not come without its challenges!

Some runs took place at 5 a.m. and some 18 km runs took place in slushy, snowy weather.  Being a Maritime runner, you are forced to run in some of the most disheartening conditions but in the end, you feel that much stronger…or crazier!  I went from running 2:1’s to finishing Half Marathons and feeling strong for my children.

Check out the results from 2014

When my twins see me tying up my sneakers, they know I am going for a run and getting ready for race day.

Finish lines and finish times are always on a runners mind but for me, it’s all about the chocolate milk and the medal! This will be my third year running in the Marathon by the Sea.  I am looking forward to running the 10 km! The atmosphere there is always so good for the soul, and the encouragement you give and receive at this event is unlike any other!

Check out the photo gallery from last year

she started running, Erica has collected quite a few medals for her efforts.