Kimberlie Sarters hits the halfway point of the Bluenose Marathon in Halifax in May. Photo Submitted

About five years ago, Kimberlie Sarters decided to get fitness back in her life.

As a youngster growing up in Granby, Que., she was involved in most things kids do – basketball and soccer topping her list of recreation pursuits.

Running, as it was, proved a training mechanism for her other activities.

She also gave rugby a try for a while but after university, she settled into her career, which for the past eight years, has taken her to the New Brunswick government offices in Fredericton.

It was in 2010, when she assessed her lifestyle and wasn’t happy with an increasing sedentary lifestyle.

That realization, coupled with known health issues in her family, sparked her desire to get going and make some significant changes in her lifestyle.

“I knew I had to get back on track,” she said. “So I went to the gym and did a lot of cardio on the treadmill. One of the personal trainers saw I was doing a lot of running and asked if I wanted to join their team for the Run For the Cure. I was all over that.” 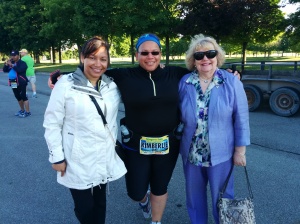 Kimberlie Sarters celebrates with her sister Elaine and her mother Carmen at the Niagara Fall Women’s Half Marathon this past June. Photo Submitted.

After that experience, she followed with a 10-kilometre training plan for the Fredericton Marathon and before she knew it, she had, at the urging of a friend, registered for the Ottawa half marathon. Thanks to leadership from coach Mark Kirby, she again conquered her training goal for that premier event.

It was another step in the transformation into a new way of life for the 39-year-old Sarters, one she definitely would not trade.

“There are the health benefits, both physical and mental,” she said. “It is just so good from a social point of view. The friends I have made, the community I am with, it is so worth it.

“Running is such a confidence builder and there are always goals you can reach – whether it is distance, pace or speed. There is so much you can accomplish.”

There are other aspects, she explains, most notably an all-inclusive approach.

“A point I would like to make is that anyone can run – there’s no shape, size, pace or age requirement,” she said. “As my friend eloquently phrased it during a motivational presentation: ‘Just show up. Period.’

Now, with those bonds with her coaches and other runners, she’s a veteran of many races and this past May, she conquered her first marathon, finishing an emotional four-month training journey by completing the Blue Nose Marathon in Halifax.

“With the help and guidance of great coaches and some phenomenal friends, I made my way to Halifax,” she said. “It was amazing. It was probably the coolest experience I have ever had. It was great to know you are in the club, the marathon club.”

She started the trek to Halifax in January with a training group in Fredericton, successfully dealing with the progression of distance through the tough winter and the associated ups and downs of distance training.

“I was the last marathoner to cross the line but I had a police escort, my friends who joined up with me and the entire time, it seemed like someone was cheering me on. You get to the 38th kilometre and it was so intense but people were cheering me on. Then near the end, a lot of people flanked me and brought me in. It was amazing.”

She remember emotions hitting her more in the final stages of training rather than the exhaustive effort of the 42.2-kilometre route.

In particular was the last 36-km training effort that took her into downtown Fredericton several weekends before the Halifax event.

“I remember looking down at my watch and saying, ‘this is it, this is 36 kilometres.’ After four months of training, that is where it was intense for me in terms of emotions.”

These days, her involvement is not limited to training.

As she developed confidence and found her stride, she wanted to serve the very community in which she has gained so much – in the form of fitness, social avenues and other aspects.

She accomplished that by leading running groups through 5km training programs, motivating others to complete their running goals.

Later this month, a group under her watchful and encouraging eyes will take part in the Liv9 Fall Classic, completing the very accomplishments Sarters did when she got going.

“It is the most rewarding feeling,” Sarters said. “To see someone improve and gain confidence, it is just out of this world. Giving back like that is phenomenal.”

As for the future, she is planning to take part in the Granby half marathon in October and then will set her agenda for 2016.

Kevin Barrett Kevin’s column appears every other Saturday. If you have a suggestion for a feature story, email him at kevinbarrett16@gmail.com or visit barrettkevin.wordpress.com.