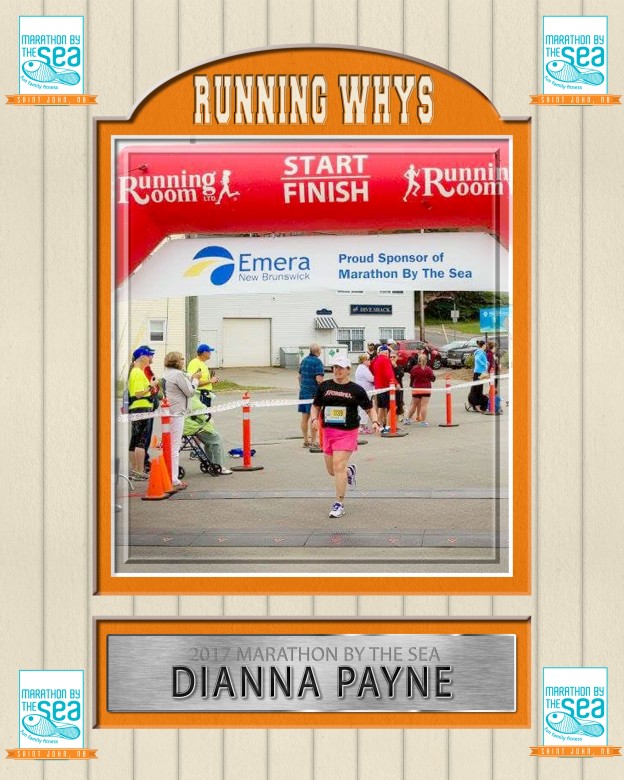 It’s a relationship still going strong – one she gives credit to many factors, including her participation in her first race – the 2007 Emera Marathon By The Sea.

But for Dianna, her love for running goes beyond the fitness benefits she gains. It is about her social network, which plays a critical role in how the sport has grown into such an important part of her life.

“It was fun and I was meeting new people,” she said of heGoodlifer first steps. “I find with how things have gone, I can’t give it up because then, I am not going to see the friends I made. That probably sounds silly but in my mind, it works. If I want to see my friends, I have to keep running.”

Since beginning in 2007, she has raced in every MBTS, other than 2012, and while training can be tough, she’s always enjoyed the race itself.

“Even during the race, the people you get to talk to from all over the place, it is quite amazing. It does not matter what you do for a living – it is just, ‘hey, how are doing?’ It is interesting and fun.”

Dianna, born and raised in Saint John, works as a security officer at Irving Pulp & Paper. Her initial running motivation came as she wanted to get in shape when she was thinking about applying to become an RCMP officer, knowing she needed to prepare for the tough fitness tests.

She learned about training sessions at the GoodLife Gym’s location at the Rothesay Ave Superstore, signed up for a learn-to-run clinic, and got going with a one-minute run, one-minute walk program.

While she changed her mind on her career path, she never stopped running and today, she’s surprised and pleased with her decade of progress.

“I just try to go out and have fun and try to get some exercise in at the same time,” she said. “It was hard to run but it was an activity that became a bit easier for me.

“Even 10 years later, I find it hard to believe I can talk and run at the same time.”

Register for this year’s Marathon By The Sea

In 2011, she travelled with Brenda Guitard, Sherri Colvill-McCavour and Marta Kelly to complete a half marathon at Disneyland in California and then the next year, she was part of a New Brunswick group that raced the Bermuda Triangle Challenge. Dianna ran a full marathon and several other shorter races. 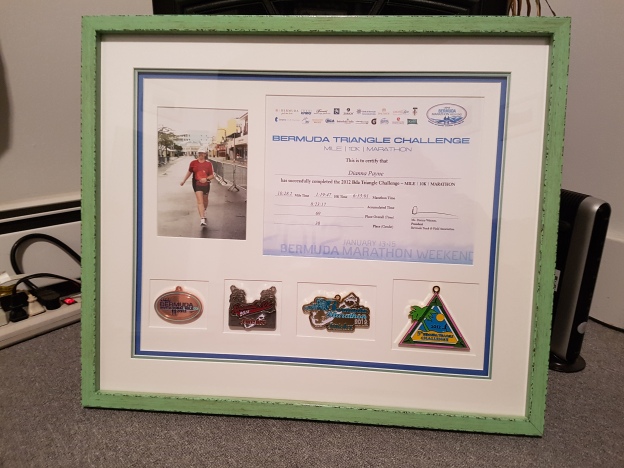 At Disneyland, she decided to mark the occasion with a special Canada shirt she bought at the Running Room.

“There was a guy in the same corral as me, who turns out was from B.C., and was wearing the exact same shirt,” she said. “A girl behind us wanted to know if she could take a picture of us, thinking we were together…we had no idea who each other was. Looking back, it was neat to have that Canadian connection.”

In August, Dianna is planning to compete in the Port City Challenge for MBTS, running the Into the Night 5km on Friday, the Middleton and Associates Harbour Passage 5 km on Saturday and the Running Room half marathon on Sunday.

Last year, she ran the 5/5/10 and the previous year, she competed the 5/5/half components.

It’s been a busy year already.

She ran the 10-kilometre distance at the Hypothermic half marathon, the Fredericton Half Marathon, the 5 km and the full events at the Blue Nose Marathon in Halifax and the half in Sussex’s Across Town for Crosswinds event. 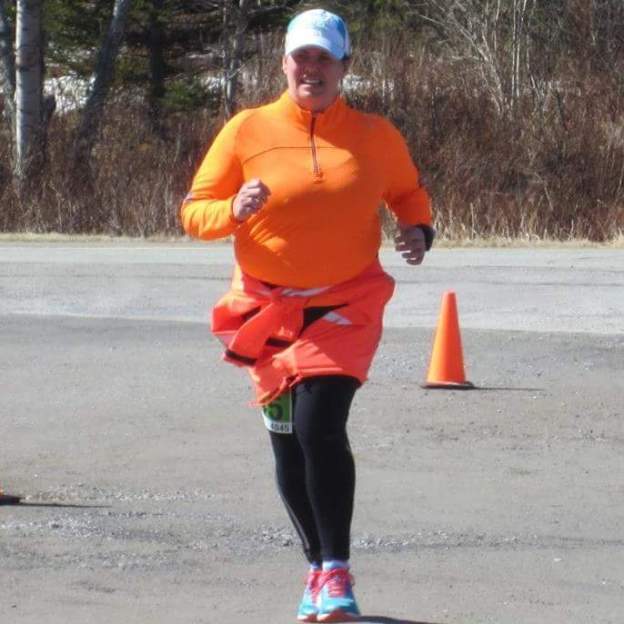 This weekend, she is headed to the Dartmouth 5k Sole Sisters Saturday and then will ride the bike as part of a team in the Hampton Ladies Triathlon Sunday. After that, she will race the half marathon as the Bay of Fundy International Marathon in Campobello and compete in the Tely 10 in Newfoundland before running in Saint John.

“It keeps me occupied,” said Dianna with a laugh. “What I like most about running are the friends that I made along the way. They keep me going and it opened up a whole world to try different things like triathlons and destination travel.”