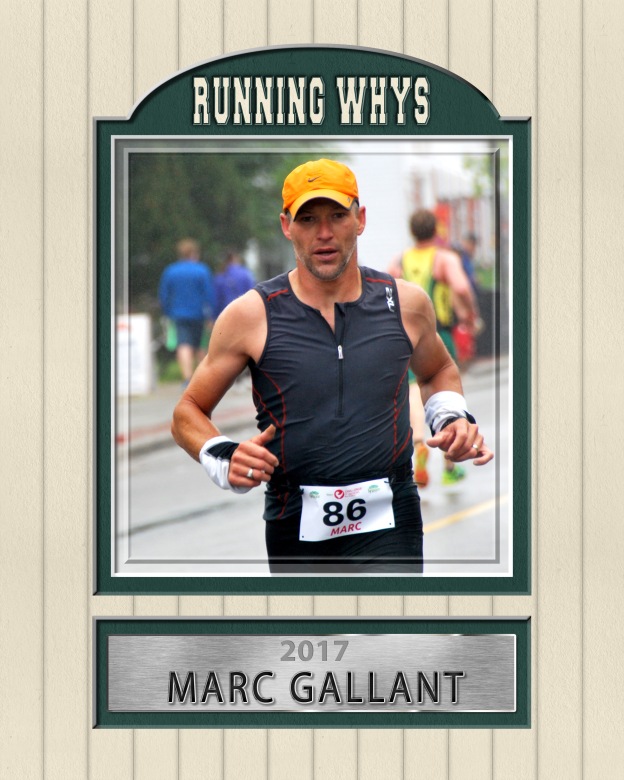 It was five years ago when, somewhat reluctantly, Fredericton’s Marc Gallant took his first steps as a runner, taking part in a group with his wife Tanya to help her tackle a resolution to improve her fitness levels.

Initially, he was not that interested in joining Tanya and one of her friends in a 2012 Running Room clinic. But one week, when Tanya’s friend could not make it, he relented and joined his wife for the weekly run. END_OF_DOCUMENT_TOKEN_TO_BE_REPLACED

This story ran in the Nov. 26th edition of the Daily Gleaner

The New Brunswick running season wrapped up last weekend with an impressive awards and Hall of Fame banquet in Tracadie.

But the unofficial running season takes few breaks and before we look back at the past year, planning is already well underway for next season’s events, including the Scotiabank Fredericton Marathon and the Liv9 Fall Classic. END_OF_DOCUMENT_TOKEN_TO_BE_REPLACED 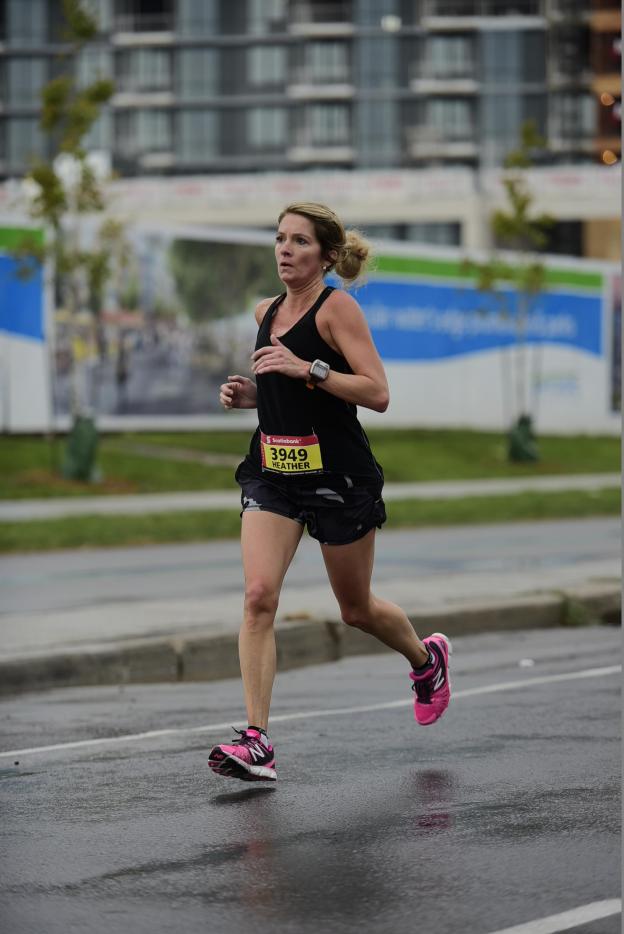 Heather Suttie of Fredericton competed in last weekend’s Toronto Marathon, finishing in a  time of 3:20.17, good for second place in her 45-49 age group and 43rd overall in the women’s race, which featured 1,407 runners. Photo submitted.

This column ran in the Oct. 22 edition of the Daily Gleaner.

Like many who are about to celebrate a significant birthday, Heather Suttie made a plan to mark the occasion in style.

So when it came to her big 4-0, she figured running a marathon would serve as the perfect occasion to achieve one of her major personal goals. She started out by conducting a bit of research, found a contact for Mike Simmons, a highly regarded coach/mentor/athlete and was set to call him for some guidance. END_OF_DOCUMENT_TOKEN_TO_BE_REPLACED

This story ran in the July 30 edition of the Daily Gleaner.

It was more than 20 years ago when Dianne Sharpe found the flexibility in running as the perfect substitute for the regimented fitness classes she was having a tough time making because of work demands and life with a young family.

Little did the Saint John native, who has called Fredericton home since the mid 1980s, realize then that she’d never leave her new recreational pursuit and that it would take her to some of the biggest races the sport has to offer.

“I feel free when I am running and I love that,” said Sharpe, a speech language pathologist in the city. END_OF_DOCUMENT_TOKEN_TO_BE_REPLACED 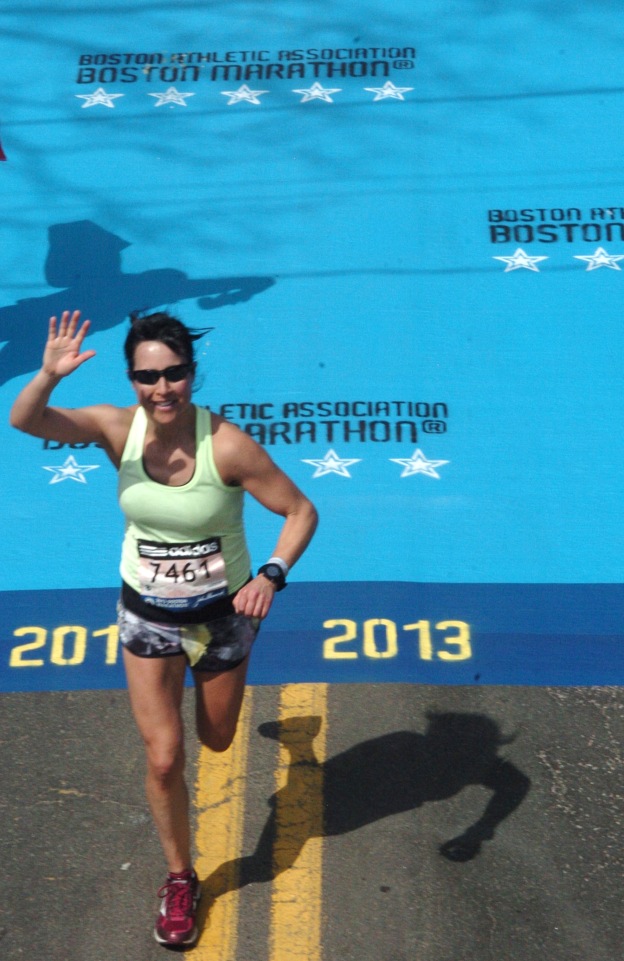 Cathy Jeffrey races in the 2013 Boston Marathon, less than two years after taking up running the sport.

This article appeared in the Fredericton Daily Gleaner June 18.

Growing up in Sackville, Cathy Jeffrey first used jogging to keep in shape for her high performance tennis career.

She has many memories of running behind the family suburban van near her cottage with her siblings, training until her father “could see us in the mirror, laying face down in the dirt.”

The early regiment paid dividends for Jeffrey, who competed annually at the Canadian Junior National Tennis Championships, winning a couple of doubles titles, all of which served as a stepping stone to making the Virginia Tech University tennis team on a full tuition Division 1 scholarship. END_OF_DOCUMENT_TOKEN_TO_BE_REPLACED 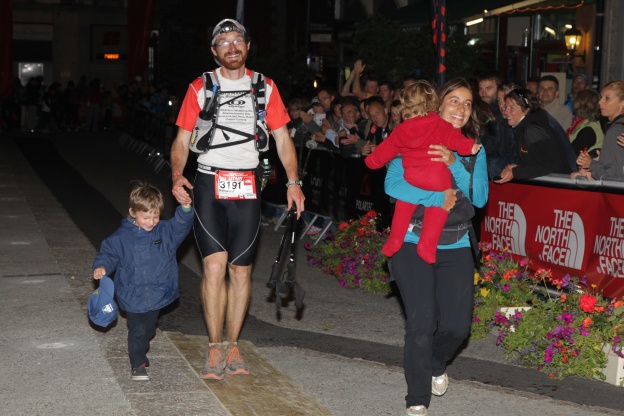 The story on Nat Couture kicks off our 2016 running column in the Fredericton Daily Gleaner, where every second week, we will feature a runner from the Greater Fredericton area. If you have suggestions for someone with a great story, send a note to kevinbarrett16@gmail.com. Enjoy.

For Fredericton’s Nat Couture, the Boston Marathon represents a novel approach to distance running, one that contrasts conventional thinking.

When the Fredericton runner and ultramarathon veteran starts Monday’s 120th running of the world’s most celebrated marathon, he’ll consider it a short event, one where he will star quickly and push his body past the point of exhaustion in hopes of producing a new personal best time – somewhere in the neighbourhood of two hours and 45 minutes.

That’s because, in addition to numerous marathons on his sporting resume, he’s become accomplished and successful in ultra racing, where 100 mile events are common place.

So in his terms, Boston is a sprint – and a marathon. END_OF_DOCUMENT_TOKEN_TO_BE_REPLACED

Kay Stairs, left, met Kathrine Switzer, the first woman to run the Boston Marathon, during pre-race festivities of the 2015 event. Stairs qualified for and competed in the race for the first time last month. Photo Submitted.

This story ran in the Fredericton Daily Gleaner May 16.

Midway through training for an attempt to qualify for the Boston Marathon, Fredericton’s Kay Stairs got married.

Several days after tying the knot, Kay and her husband Richard spent a few days in Saint John and the couple celebrated by tying their sneakers and taking to the roads of the Port City.

“We just went down for a few days after the wedding and proceeded to go out for a 20-mile run,” said Stairs, chuckling at her fitness regiment in February 2014.

“You gotta do what you gotta do.” END_OF_DOCUMENT_TOKEN_TO_BE_REPLACED 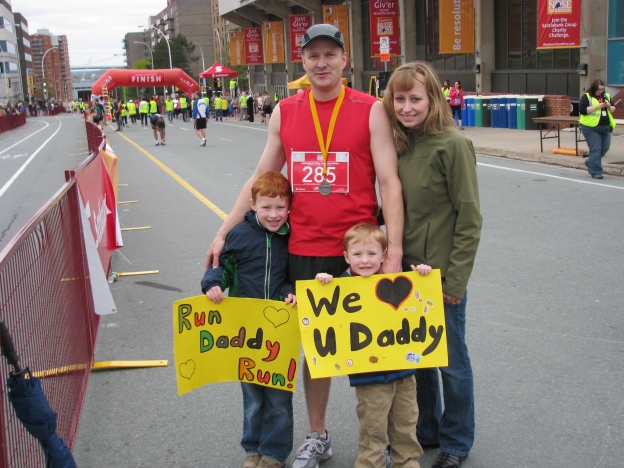 Jamie Wolverton of Fredericton is shown in this photo with his wife Dorothy, right and children Connor, left and Caden, after completing his first marathon at the 2011 Bluenose Marathon in Halifax. Monday Wolverton will compete in the Boston Marathon for the first time. Photo Submitted

For runners, it’s time for Boston, a quintessential quest for many in pursuit of their most prestigious of sporting goals. It’s an aspiration that Fredericton’s Jamie Wolverton has imagined for years.

On Monday, it becomes reality as he steps to the starting line at the Boston Marathon for the first time, a reward for his persistence and dedication, especially after one of the Maritimes’ harshest of winters.

“I started running distance a few years ago,” said Wolverton, the 42-year-old executive director of the New Brunswick Sports Hall of Fame. “Once I got into it, Boston quickly got into my sights.” 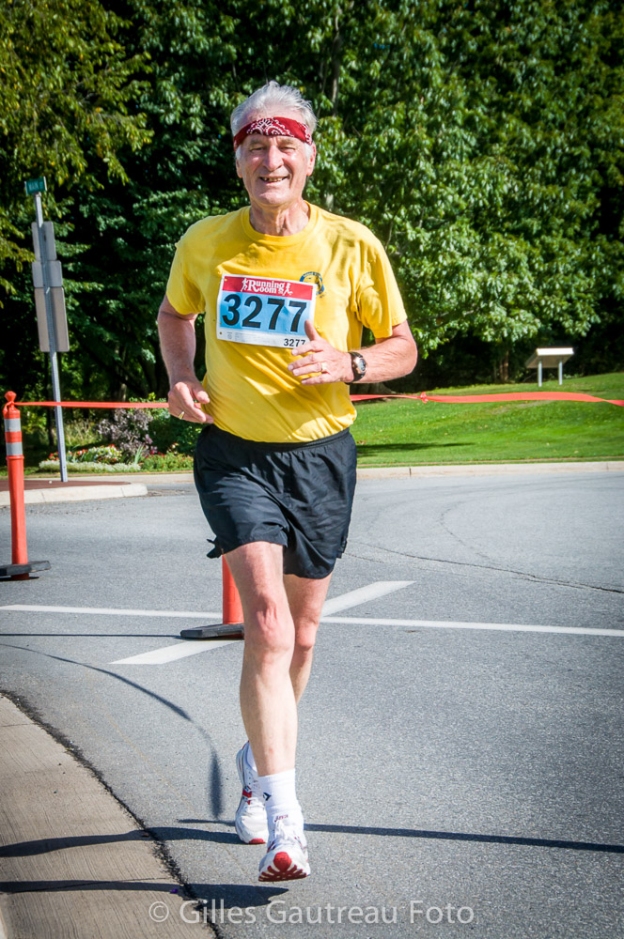 Phil Booker of Fredericton, shown here in the 2014 Hampton 5-Miler, started running in 1991 at the age of 48 and has been going strong since. He estimates he’s raced in 500 events, including 40 marathons. Photo Gilles Gautreau/RunNB

Here is the latest edition in The Running Whys series that ran in the Daily Gleaner earlier this month (note the time references). It features Phil Booker of Fredericton who did not start running until he was 48. He now has approximately 500 races under his belt. Here is his story.

In sport, the numbers game tends to dominate. Stats, over-under, wins, losses and other areas of analysis are prevalent in all areas, both for competitive and recreational endeavors.

In running, particularly with the use of GPS devices that assist training and racing pace, statistics remain ever present.

Indeed, for veteran marathoner and Fredericton native Phil Booker, an assessment of his career produces plenty of numbers. For example, the 71-year-old real estate agent has competed in 40 marathons, and will increase that total later this year in Philadelphia and again next spring at the Boston Marathon.

He figures he’s entered approximately 500 races, including 31 this year. Next week, at the 32nd edition of the Accreon Fall Classic in Fredericton, he is optimistic about a new personal best clocking in the 10 kilometre distance. END_OF_DOCUMENT_TOKEN_TO_BE_REPLACED 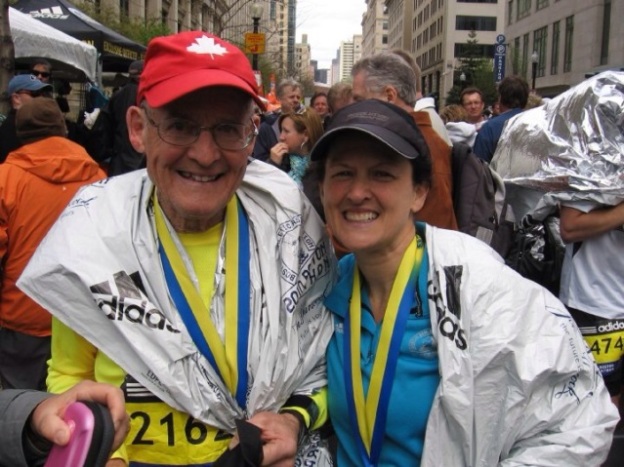 Marta and Frank Kelly celebrate after running the 2010 Boston Marathon, one of five the father and daughter tandem have competed in together. Both are expected tp take part in the 2014 Marathon By the Sea in Saint John.

This is the 15th story in a series profiling runners who will compete in the 20th anniversary running of Emera Marathon By the Sea Marathon in Saint John. The stories are also running on the MBTS Facebook page and MBTS website.

Editor’s note: Marta Kelly and Frank Kelly, the popular father –daughter team who can be seen racing many events in the greater Saint John area, were not always linked together as runners.

In fact, Marta, who started running in 1998, was at it for almost a decade before Frank, at the age of 67, first tackled a race.

It was that event – the Brent Kelly Memorial five miler in tribute to Frank’s late grandson and Marta’s late nephew – where Frank raced the course wearing jeans, a sweatshirt, wool socks and work boots. END_OF_DOCUMENT_TOKEN_TO_BE_REPLACED