This story ran in the Daily Gleaner in September.

Erika Kubik’s return home has been nothing short of a dream.

The 32-year-old Fredericton native moved back to the city in December, re-establishing herself in the area she lived until she was approximately 10 years old.

What she discovered was a perfect venue for her reasonably new hobby – running. It’s a sport she took up four years ago and one that she credits for many positive attributes in her life. END_OF_DOCUMENT_TOKEN_TO_BE_REPLACED

This story ran in the April 29 edition of the Daily Gleaner.

This time a year ago, Fredericton resident Mary Kate Wedge had plenty on her plate.

She was busy professionally as a pharmacist at the Dr. Everett Chalmers Hospital and the Summerside, P.E.I., native was also deep in the planning stages for her October wedding to Rob Agar.

And for good measure, she was prepping for the Fredericton Marathon.

In terms of running, there were no time guarantees last May, considering her hectic personal agenda, but she knew if she put in a strong effort on the traditionally fast course, she’d have a shot at qualifying for the 2017 Boston Marathon. END_OF_DOCUMENT_TOKEN_TO_BE_REPLACED

Among Laura Lee Mullin’s most memorable runs was the one that happened before she was married, when she brought her future husband Robert along for what she described as a test run.

They had been dating just a few months and decided to go for a 5km jog together when Laura Lee, fuelled by her ‘competitive spirit,’ decided to take Robert on a little loop.

“At least that’s what I told him,” recalls Mullin, a physiotherapist with the Department of National Defence the past 13 years. END_OF_DOCUMENT_TOKEN_TO_BE_REPLACED

The UniCats. That was the name of the secret club Kathy and her friend Michelle had when they were 12 years old. UniCats believe in the power of magic/miracles (unicorns) and are as fierce as big cats.

It is the perfect name for the team we are organizing for this year’s CIBC Run for the Cure on Sunday, Oct. 2. END_OF_DOCUMENT_TOKEN_TO_BE_REPLACED

This article ran in the Daily Gleaner on August 13.

There is a special picture of Fran Robinson in her personal library, one from last winter’s cross-country ski season, set on a beautiful day, sun shining as she looks intently onto the track feeling fit, happy with her training and ready to race.

For Robinson, the Ontario native who moved to New Brunswick to study her master’s degree, it was the culmination of months of training, complete with her summer leg work that allows her to challenge herself and live through a philosophy of active living. END_OF_DOCUMENT_TOKEN_TO_BE_REPLACED

In the game of running, the marathon represents a most treasured of distances; an exceptionally difficult test of endurance and will in the quest for one of life’s great bucket list items.

Finish the grueling 42.2 km route and the months of intensive training and personal sacrifices made along the way gain you membership into an exclusive club representing just one percent of the population. END_OF_DOCUMENT_TOKEN_TO_BE_REPLACED

Jeremy Brown of Fredericton will compete in the Port City Challenge, tackling the 5k runs on Friday August 12 and Saturday, August 13 and the 10 k race Sunday, August 14 during Marathon By The Sea.

He will turn 30 next month and as a youngster, was a soccer player, which helped him get introduced to running in the first place. END_OF_DOCUMENT_TOKEN_TO_BE_REPLACED

Brenda Guitard is shown here in the 2013 Boston Marathon, turning onto Bolyston Street toward the finish line.

Many people in the Saint John running community will recognize the person we have profiled – Brenda Guitard. Originally, we asked a few questions and Brenda suggested we weave them into a story.

But she’s done such an awesome job of detailing her career, her words are perfect.

Here is today’s Running Whys for the Marathon by the Sea, which takes place Aug 12-14 in Saint John.

I was born and raised in Saint John. After graduating from University, I moved to Northern Ontario, where I taught high school for 18 years. In 2008, I returned to Saint John, supply teaching and working at the Running Room. For the last four years, I have been teaching physical education in elementary school – One year at Sussex Elementary School before moving Belleisle Elementary School, where I am in my third year. I continue to work at the Running Room part-time. END_OF_DOCUMENT_TOKEN_TO_BE_REPLACED 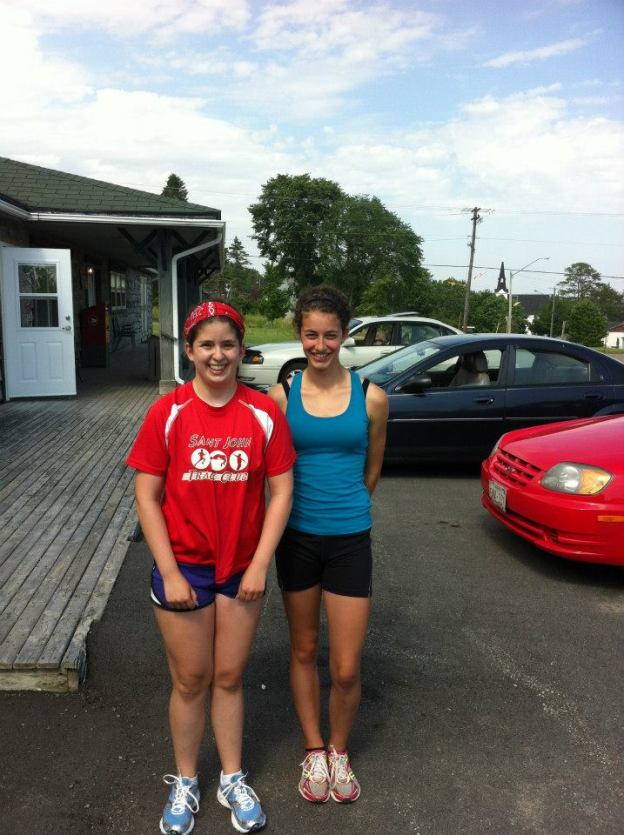 Hannah Arseneault, right, pictured with Lilly Coffin, won the half marathon title at the 2014 Marathon by the Sea.

Last year, we asked Alex Coffin, a past champion of Marathon by the Sea, for his Running Whys story. This year, Alex is slipping into the coaching role with the Running Whys and Hows, with a look at Hannah Arseneault of St. Martins. Hannah’s progress in various areas of running has benefitted from two strong appearances in the MBTS half marathon. Here, Alex details her path to the half marathon title a year ago! Enjoy

Hannah Arseneault joined the Saint John Track & Field Club even though it was a tough commute from St Martins into the city for practices. When she decided on her high school, she also committed to attend Saint John High School to take advantage of the well-supported running program there. END_OF_DOCUMENT_TOKEN_TO_BE_REPLACED

We have a big week next week as activity rises significantly for the 2015 Marathon by the Sea in Saint John, beginning Friday and lasting through Sunday. Record numbers are expected.

As was the case last year, we have five profiles in the final week, including two more Running Whys, a Running Hows, a Running Whys recap with comments from friends and family of the people we profiled this year and a special look back at the 2014 edition of the race – the 20th anniversary edition of MBTS.

Looking forward to it.

In addition, we will have another profile on a Fredericton area runner that will run in the Daily Gleaner on Aug. 9.

Hope you come back for the stories.

Here is a look back at last year’s race.

When things wrap up Sunday, we will touch base with our runners and get some perspective on their 2015 experiences.