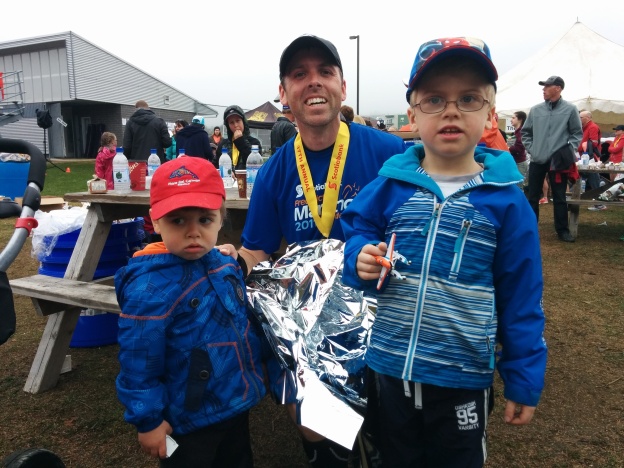 This story ran in the Fredericton Daily Gleaner on May 30.

On a good day of travelling, it takes about seven hours to make it from McLeod Hill, where 35-year-old runner Josh Dick was raised, to the Boylston Street, near the finish line of the Boston Marathon.

For Dick, a software designer in the city, another journey – an inspirational one – took just over seven years to get to Boston, a process that started because END_OF_DOCUMENT_TOKEN_TO_BE_REPLACED

Shelley Carroll qualified for her first Boston Marathon during the Blue Nose Scotiabank Marathon in May in Halifax. Her she is in the final 200 metres of that event with sunny conditions. (photo/Kelly Bird)

“But as I stood there wrapped in my space man foil, chugging my chocolate milk, and watching my running club mates finish, I cried – not sad tears, just tears of elation, relief, pride, exhaustion, and maybe a little bit of grief.”

This is first in a series of perspectives on running or other forms of active living in 2013 that represented a major goal for friends and family. I met Shelley way back when I worked at the Guardian and did not know she was a runner until 2011, when I learned she was running the 10k portion of the Legs for Literacy in Moncton, the same event in which I ran my first half marathon.

Little did I know that race represented one of the early steps for her en route to something quite significant.

Those are her words above and in her story below, Shelley details her path to qualifying for the 2014 Boston Marathon for the first time by looking back at the race in which she qualified – the 2013 Blue Nose (Scotiabank Marathon) in Halifax in May.