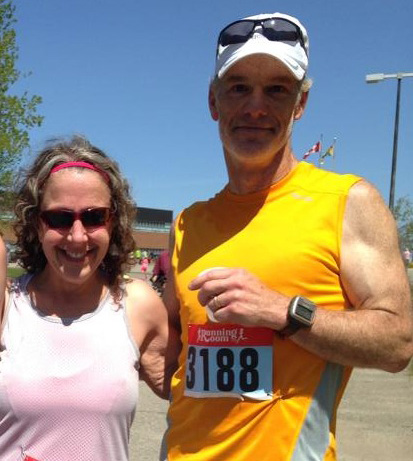 Rob and Sheila Perry- Long made dramatic changes to their lives approximately seven years ago and have not looked back since.

Editor’s note: This is the 13th story in a series profiling runners who will compete in the 20th anniversary running of Emera Marathon By the Sea Marathon in Saint John. The stories are also running on the MBTS Facebook page and MBTS website.

For Rob Long and Sheila Perry-Long, it is likely they never dreamed of how their lives might have changed when they started to incorporate running, then cycling, swimming and fitness into their lives. It started with a brave step forward by both approximately seven years ago and continues today with chapter after chapter of a journey that has seen them lose a combined weight of 240 pounds. Not only are they runners but regular participants in triathlon and both will be on hand August 10 for the 20th anniversary running of Emera Marathon By The Sea. Their riveting story is below.

I’ve never been an athlete.  In fact, I’ve never been very active, period.  Having grown up in a non-athletic family, I never had any interest in sports, especially running.  I was an overweight couch potato. END_OF_DOCUMENT_TOKEN_TO_BE_REPLACED