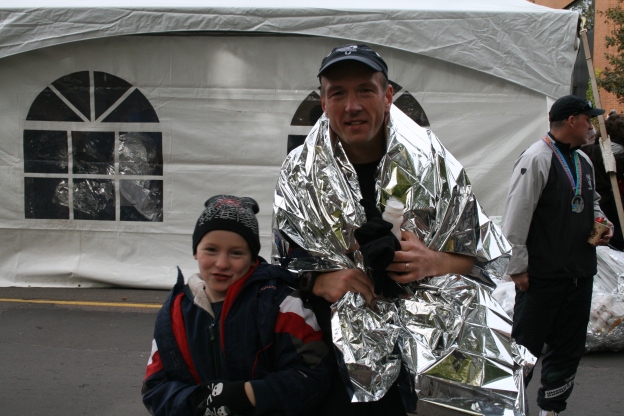 Trevor MacDonald of Hanwell and his son Cameron celebrate after one of Trevor’s races. MacDonald recently qualified for the Boston Marathon, Photo submitted.

This column ran in the June 27 edition of the Daily Gleaner. Looking back, it is understandable why Trevor MacDonald was not running that much a decade ago. Trevor and his wife Faith Ann were hectic with young family life: their son Cameron was just two-years-old and Trevor’s career in the information technology sector continued to evolve.

But in 2007, Faith Ann purchased a treadmill and it lit a small spark for Trevor, one that grew a year later when his friend Drew Allaby suggested to him he should run the Fredericton Fall Classic’s 10 kilometre race. The rest, as the old cliché goes END_OF_DOCUMENT_TOKEN_TO_BE_REPLACED

Mark Clinton never thought he’d be a runner but he got the spark shortly after he completed his first race. Photo courtesy of Gilles Gautreau.

There was a time when Mark Clinton was not a runner. He tried but even though he purchased exercise equipment, he would avoid it. Eventually, a spark was lit, he trained for a race and was hooked. But more importantly, he was exposed to the incredible race day atmosphere and hasn’t looked back, savouring the relationships he has developed along the way to improved fitness. Here is his Running Whys story, a reflection on his journey and a testament to the supportive running community in Saint John that he cherishes so much.

I was never a runner.

I admired runners, I hung around with runners, my father was a runner, but I didn’t think I had the discipline or patience to be one of those people. Where do you even start?

In 2009 I bought a treadmill. I justified the purchase 15 different ways, with 15 different promises to myself and my wife Holly. And there it sat, unused, for four years. It became END_OF_DOCUMENT_TOKEN_TO_BE_REPLACED

This story ran in the Fredericton Daily Gleaner on May 2.

When Victoria Hitchcock crossed the finished line in her first 10-kilometre race last Mother’s Day, she wept for joy.

She hugged her friend Laura McLeod.

She embraced her family and took a moment to savour her athletic feat.

Victoria Hitchcock, right, and her friend Laura McLeod show off their medals after completing the 10 kilometre race during the Scotiabank Fredericton Marathon last year. Photo Submitted

For the then mother of two, completing a distance as part of the Fredericton Marathon that seemed so daunting, so out of her comfort zone when she set her initial running goal – the emotional response reflected pride in a monumental personal accomplishment.

“It was something I never dreamt I would do,” said the 31-year-old Lincoln Heights resident. “I was never athletic, I never did any sports and I had never ran a day in my life.”

Now, after her third child arrived in February, she’s returned to running, in the final stages of a couch to 5-km program that will lead her to this year’s Fredericton Marathon once again. She’ll race in her event as part of a crowd of approximately 2,000 other runners in various distances ranging from the full marathon to the 5-km walk.

“I cried when I crossed the line because it just seemed like such an accomplishment,” she said. END_OF_DOCUMENT_TOKEN_TO_BE_REPLACED

Try as I might over the holidays and winter to maintain a regular running regiment, it did not happen.

Too dark, too much snow, too dreary.

Among the many excuses for my lack of consistency, those are the ones which raced to the forefront.

So with the start of spring, the running season and the Stanley Cup playoffs, a group of us decided to resurrect the Saint John Streakers club that operated in December, which encouraged all members to run at least one mile each day of the month.

There was enthusiasm to get the band back together again and we have, getting underway April 7 with a goal of running at least one mile everyday until mid June – or the end of the playoffs. Take your pick. END_OF_DOCUMENT_TOKEN_TO_BE_REPLACED

“Well,”’ says my wife after I completed my long run Sunday. “At least it makes for some good blogging material!”

I love the various gadgets associated with running, those to keep track of everything from pace and distance, to our treadmill that allows you to train indoors when the weather dictates or provides you with a change of pace as required.

With that in mind, we concluded our vacation to PEI on the weekend and there were a number of goals – like getting home in a reasonably sane state of mind. This included a pair of runs, one 13km at 6:05ish pace and another long run of 19km, aiming for a negative split between 6:05 pace and 6:35 pace.

So after a long couple of days Thursday and Friday, I took to the Cavendish trials on Saturday morning, one last outing near the beach and through the outstanding trail system that makes it very encouraging for bikers, runners and walkers to get out and get active.

I started a bit fast according to my Garmin but when I went to check my pace at the 1.5 km mark, the Garmin’s battery was gonzo, a victim of a week away from charging devices. No worries, I thought, I’ll just enjoy the run and since I had gone 13 kms Thursday, I knew where the route would take me. Also, I had read that it is good to get rid of your watch from time to time and enjoy the pace, free of the actual timing restraints.

Admittedly, I struggled, a function of becoming addicted to constant glances at my watch during training efforts and I probably pushed it too fast, knowing I had a small window of time before we had to move onto other tasks on our final day of visiting.

Long story short – I cut it to 11 km on a reasonably muggy morning that eventually produced some rain later in the day. My legs felt heavy and tight and the sweat soaked my t-shirt, a good indication of the conditions and my too brisk speed.

After a few visits and lots of driving, we made it home Saturday night. We all enjoyed a great  sleep in Sunday before chores took over – cleaned up the car, house, picked up our dog, groceries, stained more of the deck and some laundry. Later in the day, we went swimming and when it came 10 p.m., I was committed to 19km on the treadmill. There is a lot of construction around our home right now and it is blocking access to my normal route. So I figured to test myself on the treadmill, and since there was a baseball game on, I watched the game and started at 10:32 per mile, a leisurely pace.

The goal was to pick it up to 9:45 per mile in the second half of the run but that is where the second round of trouble started. For some reason, our treadmill shuts down after an hour or sometimes when the speed is faster than eight minutes per mile.

That happened last night, when after 70 minutes, it shut down. I started it again and after 90 seconds, it conked out again. Finally, after it went down after only another 90 seconds – and I was only 11.1 km into the run, I took to the streets, opting for another route close to home.

As it turned out, the path I chose measured 630 metres one way and after 1.2 km, it started to drizzle, then rain, then pour and then really come down, stopping shortly before I wrapped up my eighth and final kilometre of what became a too fast finish of a run highlighted by frustration and more than a few choice words.

Drenched and exhausted, I returned home determined to recharge my Garmin after every run and to get someone to look at our treadmill.

Of note, though, was the conclusion of the first stage – endurance – of the Pfitz 18-55 plan –  and the onset now, of the second stage – Lactate Threshold + Endurance – which includes more tempo runs and greater distances over a five-week span. This is the heart of this plan and the most difficult.

This week includes a 29-km long run on the weekend and another 8km tempo as part of a medium long run Tuesday.